March Madness is upon us! I'm going to take a little break from covering NBA Possession Timing 101 and talk college hoops to help you place some bets in Vegas this week. Last year I built March Madness machine learning models to help me fill out my annual bracket. These models use some of the same concepts as my draft models. This year I have improved the models a bit and would like to share some insight for the 2015 NCAA tourney.

I'm going to provide little to no description of my methodology for two reasons:

With that being said I will give you a small peak into how they are built. My models are based upon a top-down approach using team level stats from various data sources1. I use data from all D1 teams across all games since 20102. Some current limitations to the models are that they don't account for: recent injuries/suspensions (Louisville), historical underachieving (Kansas), historical overachieving (Izzo), recent hot/cold trends (Zona), travel distance (Dayton), and probably a lot more that I would try to incorporate if this were my real job.

Despite the limitations I believe the models are good at predicting how different playing styles compete against each other to influence outcome. My goal is to have an effective way to predict the outcome of a game between two teams who haven't necessarily played against each other…which is perfect for March Madness. Enough methodology, let's get to the interesting part - what to bet on!

Who should you bet on in the round of 64?

One of my models will output what it thinks the final score difference will be (similar to Vegas point spreads). This is essentially an against the spread (ATS) predictor. It is interesting to compare the models suggestions with real Vegas spreads. I am always surprised by the spreads my models produce and how closely they align with actual Vegas spreads3. This suggests that casino models aren't all that different from my own. Across the round of 64 games, the correlation between my models projections and actual Vegas spreads is an absurd 97! Here is a table comparing: 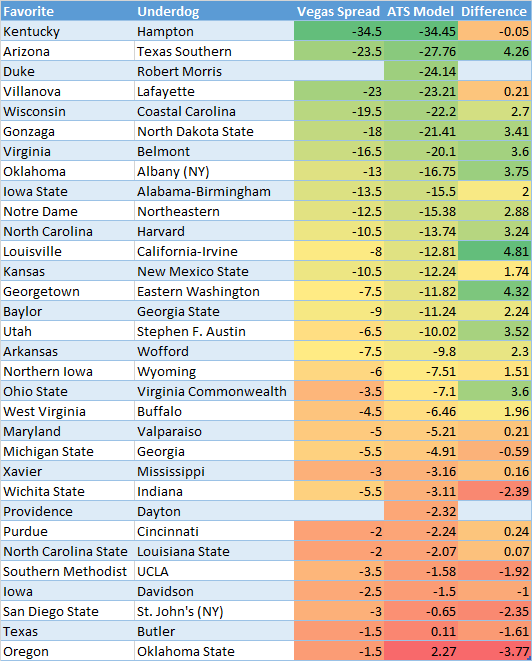 The most interesting matchups to look at are the ones where Vegas and my model differ the most. These indicate that the model is not considering something that Vegas is else or the model has some sort of edge. Here is the same chart sorting by difference with the extremes likely to be the best opportunities for betting: 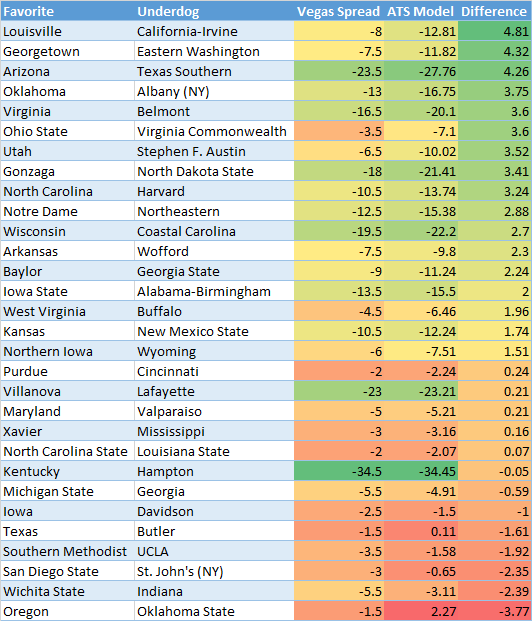 If you are a careful observer you will see that there are more positive than negative differences (meaning the model predicts a bigger win by the favorite compared to Vegas). My explanation for this (with no research to back it up) is that my model is not accounting for March being different than the rest of the season i.e. games are lower scoring in the tourney where it is likely that defenses are trying harder and offenses are less comfortable being away from home.

Let me discuss a few of the bigger differences:

I'll let you do what you want with this information but if I were in Vegas right now (ahem Dan) I would place some ATS bets on: Louisville, Georgetown, Ohio St., Utah, Indiana, UCLA, Butler

Look out for more betting insight throughout the tourney as the madness continues.