When should a team shoot to maximize possessions?

The concept of a "2-for-1" is simple: by shooting at a particular time a team can guarantee1 an extra possession in the quarter when compared to their opponent. On the other hand, a question which is not quite as simple is: When should a team take their shot to maximize the likelihood of picking up an extra possession?

In the NBA, where the shot clock is 24 seconds, a shot should obviously be taken sometime prior to 24 seconds remaining2 to ensure the opponent doesn't use up the rest of the clock before you get another possession. Ok…so you should shoot sometime before 24 seconds remaining, what about the other end of the time range?

If a team shoots too early before 24 seconds there is potential for the opponent to perform a quick shot3 which could negate the possession advantage. Makes sense…so shoot sometime before 24 seconds but not too far. How far is too far? When does this start to diminish? What is the optimal time to shoot to maximize the likelihood of an extra possession? 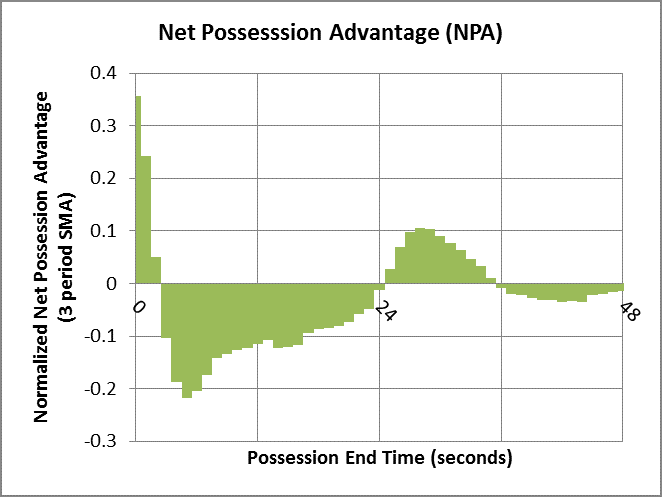 As you can see there appears to be four different time periods in the final 48 seconds of a quarter. Let me interpret them for you:

Here are some notable NPA values:

None of this information is anything ground-breaking. Looking to get a "2-for-1" and performing "end of quarter shot timing" has likely been going on since the advent of the shot clock. However, when we zoom out from the last 48 seconds we start to see something interesting which hasn't been talked about as much. Here is a chart showing the same information but over the final 4 minutes of the quarter: 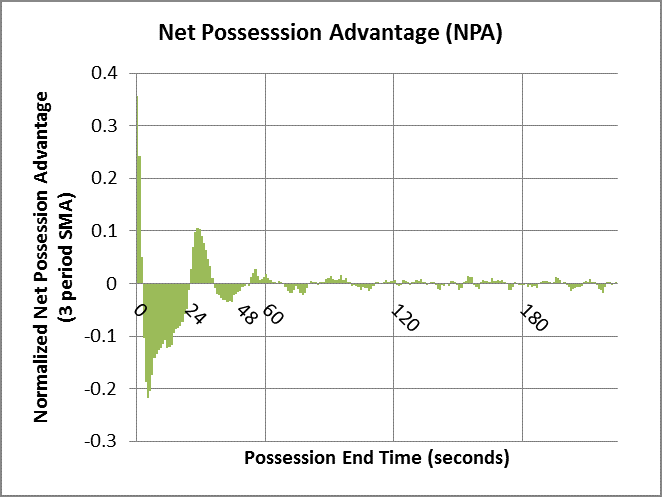 As you can see the possession advantage swings continue well beyond the "2-for-1" time period. They are very small but at the same time very noticeable. We will come back to this observation in upcoming posts but if you can't wait, then feel free to read the paper.

Now to address what you are probably all thinking at this point: If the maximum "2-for-1" possession advantage appears at 28 seconds, does this mean teams should try to "time" all their possessions to end at that point? The answer is: NO absolutely not!

I really want to like NPA. The graph are intuitive. The numbers make sense to think about. However the flaw with NPA is that it doesn't take into account the value of a possession. A half court buzzer beater is not going to provide the same value as a "run the clock out and get the final shot" possession. However, we need to start somewhere and NPA highlights one of the building blocks for understanding optimal possession timing: possession ending time does matter. So take note and I promise it will get more interesting from here…