Recently, I've been looking at height distributions over time and basketball contributions by height, all in order to answer the question: How much is it worth to be tall?

I was hoping to be able to quantify exactly how much more you'd earn if you were tall per some metric of basketball contribution. Because of the previous articles, I mainly concentrated on PER and Win Shares, even though their issues are well noted.

If you're wondering why it took me so long to finish this series, well, if you try to run a simple linear regression on salary as a function of one of those metrics and height, you get an adjusted r-squared value around 0.3- which pretty much says the model isn't valid. I tried a few non-linear regressions on the data, non of which offered much better insight. Basically, I've come to the conclusion that modeling how NBA teams actually spend their money with regards to actual basketball output is a waste of time.

What's that you say? I'm just not cleaning up the data enough? Here are the current steps I've taken:

So yeah, I could do more, but the following issues don't have great non-subjective solutions and ultimately lead to building a model with too few actual data points:

Anyways, while I may have tossed my goal of quantifying the actual value of height out the window due to, lets face it, laziness, there was some interesting data that provies some anecdotal evidence to what we know to be "true".

To exemplify the craziness with which money is shelled out in the NBA, we can look at the average salaries for any height/metric combination, namely PER and Win Shares: 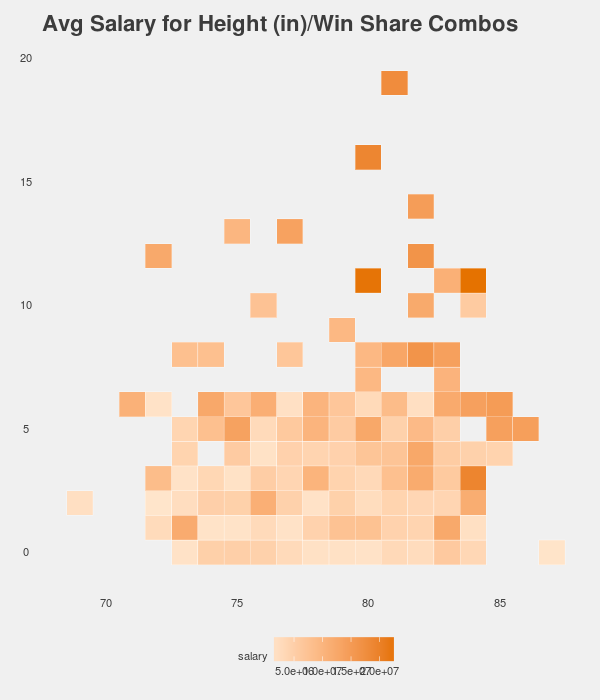 What we'd expect to see in all these graphs, is a gradient from dark to light from top to bottom (better players get paid more), and a slight gradient leaning darker from left to right (taller players get paid slightly more for contributing the same amount). While there is some truth to "average" players getting paid slightly more when they're big men, the fact that below average players can sometimes average as much as better players, regardless of height, is very concerning, and speaks to some inefficiencies in how salaries are distributed.

Because there aren't many data points in each of these boxes, I tried to simplify these heatmaps down to position instead of height, to see if there's some general trends in how we pay each of the 5 big positions: 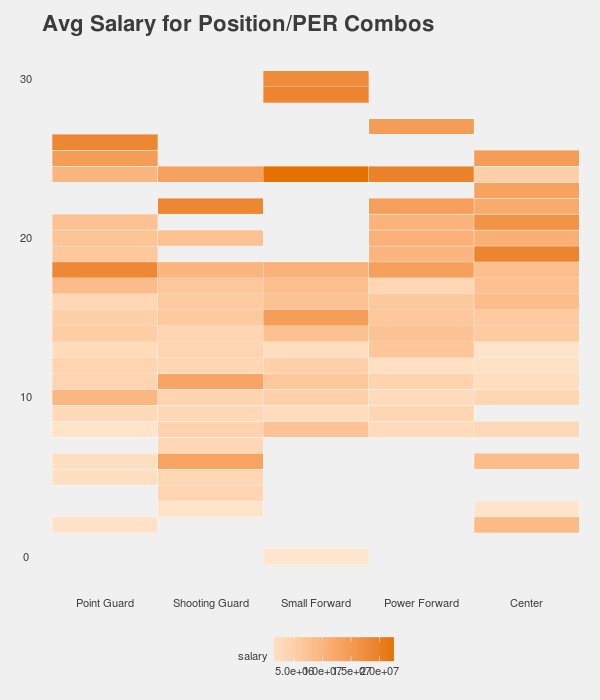 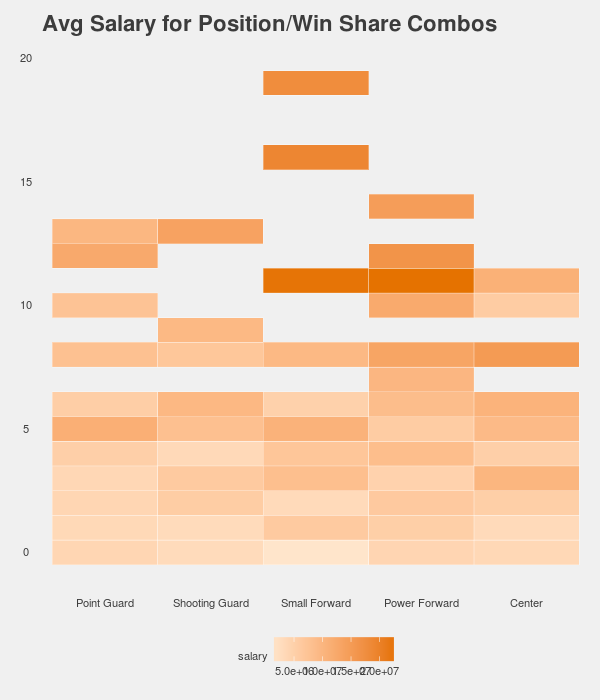 While these heatmaps diverge from the topic of height, we can see that the "height" trend still holds (slightly), and that wing players often get overpaid. Small forwards in particular, outside of the elite 3s, mostly offer similar PER and it appears its difficult to judge how much to pay them when contract negotiations roll around…

While this was mostly an uneventful series, we did learn there is some anecdotal truth to height leading to greater earnings. While it also likely won't amount to much, I'll probably end up doing some research into salary inefficiencies with other statistics.